In this installment in our series of Oasis Wealth Planning’s Evidence-Based Investing Insights, we talk about Financial Gurus and Other Fantastic Creatures.

In our last piece, “Ignoring the Siren Song of Daily Market Pricing,” we explored how price-setting occurs in capital markets, and why investors should avoid reacting to breaking news.  The market reacts faster and smarter than an individual investor.   The cost and competition are overwhelming.  Today, we’ll explain why you’re also ill-advised to seek a pinch-hitting expert to compete for you.

Instead, Buffett suggests, “Seizing the opportunities then offered does not require great intelligence, a degree in economics or a familiarity with every bit of Wall Street jargon.  What investors then need instead is an ability to both disregard mob fears or enthusiasms and to focus on a few simple fundamentals.”

As we covered in “You, the Market, and the Prices You Pay,” independently thinking groups (like capital markets) are better at arriving at accurate answers than even the smartest individuals in the group.  That’s in part because their wisdom is already bundled into prices, which adjust with fierce speed and relative accuracy to any new, unanticipated news.

Thus, even experts who specialize in analyzing business, economic, geopolitical or any other market-related information face the same challenges you do if they try to beat the market by successfully predicting an uncertain reaction to unexpected news that is not yet known.  For them too, particularly after costs, group intelligence remains a prohibitively tall hurdle to overcome.

The Proof Is in the Pudding

But maybe you know of an extraordinary stock broker or fund manager or TV personality who strikes you as being among the elite few who can make the leap.  Maybe they have a stellar track record, impeccable credentials, a secret sauce, or brand-name recognition.  In your search for investment help, this person seems most qualified to invest for you.   Should you turn to them for their latest market tips and use their ‘black box’ strategy, instead of settling for “average” returns?

Let’s set aside market theory for a moment and consider what has actually been working.  After all, if investors who did their homework were able to depend on outperforming experts, we should expect to see credible evidence of it.

The disappointment isn’t limited to U.S. markets, either.  Morningstar produces a similar, semiannual European Active/Passive Barometer, in which it reached similar conclusions (emphasis ours): “European stock-pickers’ long-term success rates are low.  Most active managers both survived and outperformed their average passive peer in just three of the 49 categories we examined over the decade through December 2018.” 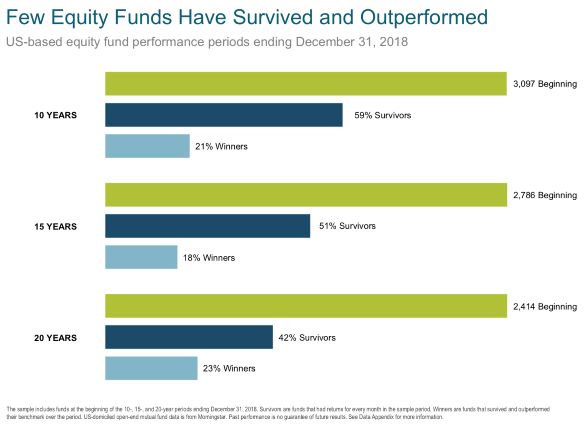 Across the decades and around the world, a multitude of academic studies have scrutinized active manager performance and consistently found it lacking.

You may think that hedge fund managers and similar experts can fare better in their more specialized world of less-constrained strategies.  However, the evidence dispels that notion as well.  For example, financial author Larry Swedroe provides an ongoing hedge fund performance update on ETF.com. In April 2019, he reported, “over the 10-year period ending 2018, [hedge funds] underperformed every single major equity asset class by wide margins.”  Even for hedge funds, Swedroe suggests “the efficiency of the market, as well as the cost of the effort” are too tough to consistently overcome.

In the last few articles, we’ve been assessing some of the investment foes you face.  You may be wondering how you can sidestep rather than face such formidable foes, and where the path lies to letting the markets work for you.  In our next installment, we’ll begin to introduce you to your financial friends and the strategies that let them work on your behalf.  Next, we will explore what some have called the closest thing to a free lunch you’ll find in the world of investing: Diversification.