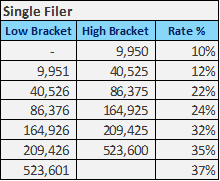 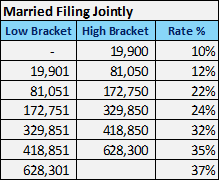 Note that the President-elect Biden has proposed increasing the 37% rate to 39.6% and has proposed generally increasing the taxes on those making $400,000 or greater.  This may mean adjusting the 35% bracket as well, but nothing is certain at this point, of course.

Many of the retirement plan contribution limits remained unchanged; the Annual Additions amount (i.e., the amount both employer and employee can contribute in the aggregate) increased slightly.  Those amounts are as follows: 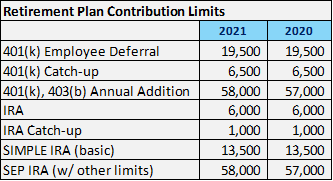 Note that the various thresholds for the IRA deduction and the Roth IRA contribution eligibility did increase by an inflationary amount.

The contribution limits for the Medical Flexible Spending Account remained unchanged at $2,750 while the Health Savings Account (“HSAs”) contribution limit increased slightly as follows: Single taxpayers’ limit increased to $3,600 (from $3,550); the Married Filing Jointly limit increased to $7,200 (from $7,100).  The catch-up for HSAs remained at $1,000.  As our clients know, we are generally quite bullish on HSAs.  If used correctly with the right focus on selecting the investment options for long-term needs, even this small contribution can result in significant tax savings over the long-term.  Just as the cowbell in today’s modern music, Health Savings Accounts continue to be either underutilized or wrongly implemented.

Staying with the medical expense theme, the Adjusted Gross Income (“AGI”) phaseout for itemized deductions remains at 7.5% for 2021 – a recent expansion of this more favorable rule (compared to 10% of AGI). This does not come into play too often, but this should not be ignored because this can result in overlooked tax savings for those with significant medical expenses in one year.

The Child Tax Credit remains unchanged at $2,000 per child while the cliff thresholds also remain unchanged at $200,000 (Single filers) and $400,000 (Joint filers).  These amounts are not legislated to increase by inflation. This is a significant benefit so those couples that are looking for greater tax savings, the time is now!

The Qualified Business Income deduction phaseouts increased by an inflationary amount for certain taxpayers where the business is deemed a “specified service trade or business”.  (Financial planners and tax consultants would be caught in this web – boo!)  This benefit is phased out for single taxpayers from $164,900 to $214,900 and for joint filers from $329,800 to $429,800.  For those that qualify, this 20% deduction for certain business income continues to be a nice benefit for business owners and is legislated to continue through 2025.  It will be interesting to see if any changes are made to this tax benefit from the new administration.  Stay tuned!

The capital gains rates remain unchanged, and the thresholds at which it applies increased by an inflationary amount.  The table below illustrates at what level of income that tax rate would apply.  Note that the new administration has proposed a 39.6% tax rate for those making over $1,000,000.  While this is arguably unlikely to pass, you may be in a position in which you need to be aware of it.  If this does pass and if it impacts you, thank Warren Buffet for complaining about how low his tax rate is.

The Net Investment Income Tax remains unchanged and will likely catch a higher percentage of taxpayers under its spell.  The tax rate is still 3.8% and may apply to Single taxpayers with Modified Adjusted Gross Income (“MAGI”) of $200,000 or more and Joint taxpayers with MAGI of $250,000 or less.  As this new tax was introduced in 2013, that is the equivalent of approximately $180,000 (Single filers) and $225,000 (Joint filers).  This effectively increases the tax rate higher than the 3.8% in today’s dollars, but you didn’t ask me about tax policy, did you?  There are a lot of rules related to this tax that you should be aware of, but be careful before this stealth tax impacts you.

The Income Related Monthly Adjustment Amount (“IRMAA”) thresholds increased by an inflationary amount, anywhere from 1.1% to 1.8%, depending on the tier. The first two tiers for Single taxpayers are now $88,000 and $111,000 and twice that amount for Joint filers.  For those over 65, this tax can add approximately 1% - 2.5% onto your tax bill.

Regarding the transfer tax rules, the annual gift tax exclusion remains the same at $15,000.  (It only increases in $1,000 increments.  It is likely to increase in 2022 as it last increased in 2018.)  The transfer tax exemption, or the amount you can transfer to heirs during life or at death, increased to $11,700,000 (from $11,580,000), a mere 1% increase.  As the tax rate is a flat tax of 40% above those amounts, I am just glad I don’t fall into that trap.  How about you?  However, more of us could be subject to the transfer tax if the laws do change – and, it is not improbable that the exemption decreases due to either the Biden administration proposals or the mere sunsetting of the laws to the pre-2018 levels.

Those are just a few of the tax numbers and changes for 2021.  Stay tuned because there is a significant chance that we will see tax legislation in the next two years.  If you are not already working with a tax-focused financial planner, 2021 may be the year you want to seek help.  At Oasis Wealth Planning, we are here for you should you need such counsel.